Deprecated: Array and string offset access syntax with curly braces is deprecated in /home/rcna/public_html/components/functions.php on line 36

Deprecated: Array and string offset access syntax with curly braces is deprecated in /home/rcna/public_html/components/functions.php on line 53

Deprecated: Array and string offset access syntax with curly braces is deprecated in /home/rcna/public_html/components/functions.php on line 55

Contrary to what some Canadian coin catalogues have been listing for well over a century, the first Canadian coin - at least for use exclusively in Canada - was not the 1670 issue of copper "doubles" and silver 5- and 15-sols pieces. These coins were struck for all French possessions covered by the boundaries defined as being in the purvue of the French West India Company, established May 26, 1664. In addition to French Canada, Acadia and the French settlements of Newfoundland, they were also meant for use in all the French colonies of the West Indies. The Royal Proclamation of February 19, 1670, described these coins, set the coinage amounts (i.e. 20,000 livres worth of copper 2-denier (or doubles) pieces, 50,000 livres worth of 5-sols silver pieces and 30,000 livres worth of the 15-sols coins) to be struck in the Paris Mint for circulation in "the Islands and Continent of America". All of these coins were to be of the same weight, fineness and value as native French coins but, in order that they would not be abruptly shipped home in payment for goods such as heretofore had always happened with ordinary French coins, they were - by law - to circulate only in the Americas. The exact reading is: "But they are not to be exported, nor are our other subjects to receive them or give them circulation in France, on pain of confiscation of the said coins and of exemplary punishment".1 Due to this last clause, few if any of these particular coins circulated in Canada, exactly because they were not returnable to France in payment for imports. Such businessmen as there were in Canada were all traders and required a returnable coinage by necessity; conversely, the Gloriam Regni coins did somewhat better in the French West Indies as business there tended toward manufacture of agricultural products such as sugar and less need was experienced for remittance money than for a circulating medium. Up until this time, most of the coin circulating in New France was French with bills of exchange on financial houses in the motherland used by merchants to remit larger amounts. The merchant needed coin that could be sent home if needed; the ordinary inhabitant of New France needed a circulating medium that stayed put. Move and countermove resulted until finally some degree of stability was achieved when it was decreed (December 2, 1680) that all coins in New France were to be current on the same relative basis as in France itself -except at a uniform increase of one-third in value.2 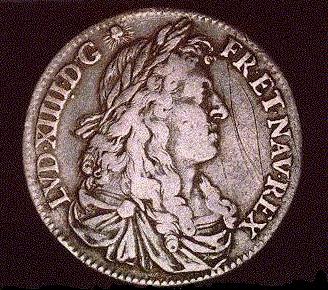 At this point, two events came together which altered the whole comfortable French-coin-only picture. Spanish American coins came to have an ever-increasing role to play in the economics of New France due to its import from two sources: (i) French Canadian trade was beginning to open up with the French West Indies, thanks to the encouragement of Intendant Talon and the currency was mostly Spanish-American silver "cobs" and (ii) little mentioned at the time but by far the most important was the illicit trade between the French fur sellers and the English (and Dutch) traders; not only were prices better for the French, but they also evaded the tax of 25 per cent levied by the French West India Company on beaver. This latter trade brought in a large number of silver 8-, 4-, 2- and 1-real "cobs" 3 struck in the Spanish American mints, principally Potosi, Lima and Mexico City, since these coins were also the usual circulating medium in the English colonies. Money flows to where it is worth the most and these were the days when a coin's face value and intrinsic worth were to be roughly equal. The English, old hands at the practices of clipping, filing and "sweating" coins to the lightest possible weight at which they would still pass, were in the happy position of being able to tender these coins at face to the many small fur traders and trappers of New France. Consequently, light coin became a problem there.

But, for every problem, there can be a decree and so there was for this one: By Decree of the Superior Council (Wednesday, September 17, 1681) 4 all foreign coins, gold or silver, should be accepted by weight, according to their value with the advance of one-third in accordance with the custom of the country. At this time, the 8-reales piece (termed "reals or piastres" in the document) of the full weight of "21 deniers" 5 should be accepted for "3 livres 19 sols and 1 denier" and those of light weight "should be diminished in proportion to their lack of weight on the basis of 11 sols a dram". 6 The Decree doesn't say so, but we may presume that it would go on "its divisions in proportion".

Human nature being what it is, it follows that a sou will be made whenever a sou can be made. Very few inhabitants of New France would have possessed a set of balance scales, let alone carry them around with them. These instruments would have been possessed mostly by government offices, apothecaries and - most of all - by merchants. Reading between the lines, we must come to the conclusion that the next move by the authorities was an attempt to remedy the unusual phenomenon of a given coin's tendency to be lighter when tendered to a merchant than when received from him. This leads us to what can be classed as Canada's first indigenous coinage. On January 13, 1683, the Superior Council of Quebec decreed that dollars and their parts were to be countermarked according to their weight.7 Those dollars of full weight (which is not spelled out in this document but one of 1681 spells it out as being of "21 deniers 8 grains") were to be stamped with a "fleur-de-lys" only and pass for 4-livres; those dollars of a weight so that by the 1681 decree are valued from 3-livres-15-sols to 4-livres were to be stamped with a fleur-de-lys and a I, passing for 3-livres-15-sols; those weighing in the 3-livres-15-sols to 3-livres-10-sols category to have a fleur-de-lys plus II and pass for the lower amount; those of 3-livres-10-sols to 3-livres-5-sols to have the fleur-de-lys plus III and pass for the lesser amount; finally, those of 3-livres-5-sols to 3-livres even to have the fleur-de-lys plus the numeral IIII and pass for 3-livres. The halves, quarters and eighths to be similarly stamped and pass in proportion.

The coins were to be stamped when offered at the office of the clerk of the court each Tuesday between 8 and 11 a.m.; there, in the presence of the councillors, the attorney general and the court clerk, they were to be weighed and appropriately marked by the clerk with dies cut by John Soullard. Each coin so weighed and stamped was taxed 6 deniers which was split evenly between the clerk and the said Soullard. At the end of each sitting, the dies would be returned to a strongbox of which the attorney-general held the keys.

Further, all persons were forbidden to offer dollars for circulation not bearing this stamp nor could they refuse them on pain of a fine. The court, nevertheless, allowed some leeway by permitting silver coins to be tendered by "mark", meaning by weight. The Mark was the standard of weight for bullion, being eight ounces Troy or 3840 grains and the value of an individual coin of full weight was determined by the number of those pieces coined from a "mark". 9

Despite the fact that, to the writer's knowledge, not a single example of these stamped coins are extant, there is little doubt that they did exist and that the stamping was carried out as ordered although apparently only for a short time. In a letter from Governor de la Barre to the head of the Department of Marine and Colonies, the Marquis de Seignelay, dated at Quebec, November 4, 1683, 10 we read the line of his report regarding this stamping of coins: "This was done and is now in operation without any noise or difficulty."

However, money remained scarce in New France, documents revealing that one expedient was merchants' notes good for petty sums. These early "Bon Pours" ("Good For" as the opening line almost always read) later became a fixture in Canada's currency. No doubt inspired by these written notes, Intendant Jacques de Meulles was forced to issue the first card money in 1685 after specie pay for the soldiers failed to arrive in the spring of that year; we should note that de Meulles exhausted all other possibilities - even to borrowing money from his friends and allowing the soldiers to hire out as day labourers - before he took (for the time) this extraordinary step. They were not issued until the 8th of June and redeemed totally (or at least as far as we know) on September 5 of that year. None of these pieces exist today, either, although documentary evidence is also overwhelming for their brief appearance in colonial New France.

(3) The Spanish-American "cobs" were crude silver coins produced in enormous numbers up until 1770s in some cases. Deriving their nickname from "cabbo da barra" (piece of the bar), they were from blanks sliced off bullion bars cast in the shape of a rod. Extremely crude in appearance, pieces which show the entire design - or even the date plus mintmark are quite rare. They were, nevertheless, struck of good weight and fineness although highly susceptible to filing and clipping. If we use, for example, the Potosi, Bolivia pieces, they were standardized in the late 17th and early 18th centuries at: 27.07 grams of .931 fine silver (.8103 Troy ounce pure silver) for the 8-reales pieces, the fractions in proportion. Early in the 18th century, all these Spanish American pieces became of .917 fine silver (.7982 Troy ounce pure silver).

(5) The full weight as struck was about 27 grams; normal practice, however, usually allowed for lightness up to 4 per cent.

back to The CN Journal list of sample articles